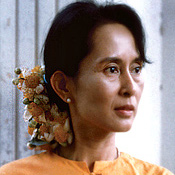 “This sentence is little more than renewed punishment for the pro-democracy movement that Aung San Suu Kyi represents. She must be freed immediately, along with all political prisoners in Burma, and the UN Security Council must respond to this persecution with a binding resolution on Burma,” said Rémy M. Beauregard, President of Rights & Democracy.

The UN Security Council resolution on Burma should include the establishment of a Commission of inquiry to investigate potential crimes against humanity as well as war crimes committed by the military junta. Such a commission would serve as the first step towards a possible referral to the International Criminal Court.

Various UN bodies and experts have reported for decades that human rights atrocities in Burma are widespread, systematic and part of state policy.  However, the UN Security Council, contrary to similar situations in the former Yugoslavia, Rwanda and Darfur, has not intervened to stop these alleged violations of international criminal law.

Military authorities accused Aung San Suu Kyi, 64, of violating the terms of her house-arrest after receiving an unsolicited visit May 3 from an American who swam to her lakefront home. Today’s sentence will add to the more than 14 years that she has spent already under house-arrest since 1989.

In 1990, the NLD won a landslide victory in parliamentary elections, but the ruling military junta refused to cede power.  The crackdown that followed on Aung San Suu Kyi and her supporters continues to this day.  Among Burma’s 2,100 political prisoners serving severe jail sentences are two winners of Rights & Democracy’s John Humphrey Award, Min Ko Naing (1999) and Su Su Nway (2006).

Human Right to Food at Risk in Nepal: Preliminary findings of an international fact-finding mission