Portrait of Indigenous Women in Indonesia

The Indonesian Archipelago hosts more than 1000 different ethnic and sub-ethnic groups, and as many languages. Such diversity means that it is a challenge to have a clear picture of the situation of indigenous peoples in general, more so to get a true overview of the situation of indigenous women in Indonesia. This is particularly true because Indonesian women are invisible in Indonesian statistics. They are not acknowledged in any government statistics related to health, justice, education, poverty or violence. However, despite this diversity, or perhaps because of it, indigenous women in Indonesia share one common element: they have to face a double marginalization: as indigenous peoples and as women.
The first factor of this marginalization is due to the fact that indigenous women are affected by the issues that touch indigenous peoples. In Indonesia this means that indigenous peoples are limited by government policies that do not acknowledge their rights to their traditional lands and natural resources. As a result of each problem affecting indigenous peoples, indigenous women face issues which affect their everyday lives. For example, if an indigenous community is displaced because their land has been granted by the government to a logging or plantation company, it is the women who have to walk longer distances to fetch water, find food and medicinal plants.
The second factor of this marginalization is that in general, as women, they do not have access to decision-making at any level, including within their own communities and in many cases within their own homes. Important decisions that influence the future direction of the community and family are done without involving women. At the community level, according to most hukum adat (customary law), the division of roles and labour of men and women in indigenous communities are quite clear. The role of women is linked to productive and reproductive work (e.g. finding water, working in the gardens and rice fields, giving birth and taking care of the family), while men hold more dominant roles in the community, such as political positions at all levels (for example in adat institutions, farmers groups, youth associations or others). 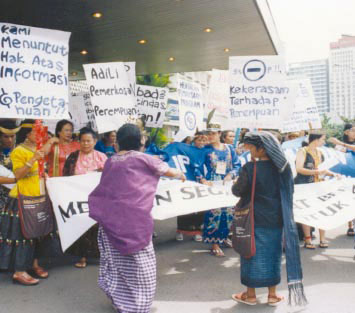 A demonstration of Indonesian indigenous women against all forms of discrimination by the State.
In some indigenous communities, however, important roles and positions in decision making and leadership are held by women. This is the case in the Dayak Sikung community in West Kalimantan, the Toro Community in Central Sulawesi and the Toraja Community in South Sulawesi.
Common Issues
Indigenous women in Indonesia face several common issues such as the disregard for their basic human rights, linked with their civil, political, economic, social and cultural rights. Indigenous women are denied access to decision-making processes which has direct impacts on their interests. This often results in problems related to health and education, as well as violence.
For indigenous women, the main causes of their health problems are a shortage of health services, a lack of information about family planning and contraception as well as the disappearance of natural medicines because of the destruction of their environment and natural resources. The most significant health problem is related to the reproduction and the maternal mortality rate. According to the United Nations Children’s Fund (UNICEF), for every 1000 births, four women die. In Papua more than 10 indigenous women die for every 1000 births.
Indigenous women face increasing violence because of the implementation of private companies which employ militias and trans-migrant workers, facilitate the sale of alcohol and increase prostitution in the areas where they operate. Moreover, women from indigenous communities whose lands and natural resources have been taken away have very few other options other than to work abroad or on other islands as transmigrant workers. Transmigration is also an issue that increases violence against indigenous women, as there are many cases of murder, sexual harassment, rape, and disappearances of indigenous women who have become trans-migrant workers.
The Indonesian Legal System and Indigenous Women
Despite the fact that Article 28I(2) of the Indonesian Constitution states that every person has the right to be free from any discrimination on any grounds and the fact that Indonesia has ratified CEDAW, as well as the International Covenant on Civil and Political Rights and the International Covenant on Economic, Social and Cultural Rights, both of which contain non-discrimination and gender equity clauses, Indonesia still has some national laws that discriminate against indigenous women. The following are just two examples:
Marriage Act (No. 1, 1974)
The Marriage Act rigidly divides roles between men and women: “The husband is the head of the household and the wife is the housewife”, (Article 31(3)). For indigenous women, this article legitimates the domination of men in the family and in the community. It also means that it is even more difficult for indigenous women to be recognized as legitimate leaders in Indonesian Law, even if they are recognized in some hukum adat. This Act restricts women’s activities to the household and keeps them far from decision-making.
Religion
Despite the fact that the 1945 Indonesian Constitution states in Article 29(2) that “The State guarantees all persons the freedom of worship, each according to his/her own religion or belief”, a Religious Ministry Instruction (no. 4, 1978) ignores this and recognizes only the five major religions of Islam, Christianity, Catholicism, Buddhism and Hinduism, ignoring the existence of indigenous beliefs. This makes it technically illegal for indigenous peoples to perpetuate their traditional culture, customs and beliefs.
What is AMAN?
In March 1999, more than 250 indigenous representatives from all over the Indonesian Archipelago met in Jakarta to share experiences and discuss their concerns at the First Congress of Indigenous Peoples of the Archipelago. AMAN (Aliansi Masyarakat Adat Nusantara – The Indigenous Peoples’ Alliance of the Archipelago), was created as a result of this Congress. AMAN is an independent civil society organization that acts as a forum for the indigenous peoples of Indonesia. It is the only national indigenous organization that also constitutes a network of indigenous organizations at the provincial and regency levels. See the map on the page 04.
Although indigenous peoples are partially recognized under Indonesian Law, the Indonesian government does not politically acknowledge indigenous peoples’ rights or existence. Consequently, AMAN works on the issues of indigenous collective rights concerning lands and territories, as well as natural resource management and the right to self-determination.
Since the Third Congress of the Indigenous Peoples of the Archipelago held in March, 2007, AMAN has a directorate specifically working on indigenous women’s issues. The directorate recognizes the importance of the work done by indigenous women at the community level, and therefore aims to involve indigenous women locally through the formation of communitybased indigenous women’s organizations. The directorate will also pursue the recognition of indigenous women at all levels, an increase in the resources that are available to indigenous women, the involvement of indigenous women in the planning, implementation and evaluation of policies at all levels as well as greater awareness among indigenous women of their rights as women and as indigenous peoples. 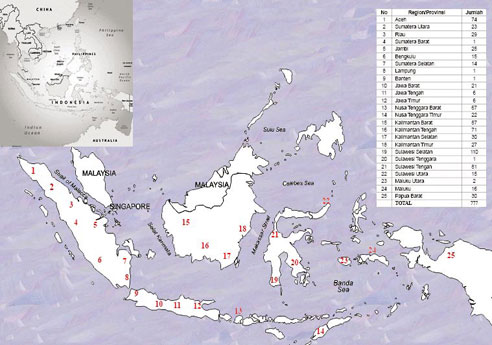 Questions for Discussion
To Find Out More

Democracy, Human Rights and Islam in the Middle East and North Africa page – 1