This sheet provides a case study of the issue discussed in Sheet 5: Development Aggression and Indigenous women in Asia, specifically highlighting the situation of Indigenous women in Indonesia. In this sheet, illustrative cases of development aggression and their subsequent impacts will highlight the reality for indigenous women in Indonesia.
Development Aggression in Indonesia
Article 33, paragraph 3 of the 1945 Indonesian Constitution states that: “The earth and water and nature contained within are controlled by the Country and are utilized for social prosperity”. Since the Soeharto era, the Indonesian Government has continued to interpret this Article as Country ownership (rather than control) of the land and natural resources in Indonesia. This has meant that the government has allowed land and resources to be taken from indigenous peoples.
In the name of development, the country has and continues to transfer land ownership to private industrial enterprises such as mining companies, industrial timber companies, forest concession holders and other industries without implementing the process of Free, Prior and Informed Consent.
Government policy-making regarding the conservation of natural areas also bypasses indigenous peoples. Human involvement in the management of natural areas is not allowed, nor are people allowed to occupy them.
To reinforce support for development programs, the Government passed regulations on foreign investment in Indonesia in 1967. These regulations made it easier for foreign investors to invest their capital in Indonesia. For the funding of these development projects, the Indonesian government relied on foreign capital from International Financial Institutions such as the World Bank and the Asian Development Bank.
Land Loss and the Destruction of Natural Resources: Impacts on Indigenous Women
The statistics regarding land loss and the destruction of natural resources are overwhelming. Since 1950, approximately 70% of primary forest in Indonesia has been destroyed (Forest Watch Indonesia). This is the result of large-scale commercial forest felling for forest concessions and industrial timber plantations. This is aggravated by illegal logging in primary forests which contributes 70 to 80 % of wood production in Indonesia (Friends of the Earth, Indonesia). Equally disturbing are mining statistics. According to a report by The Mining Network, 35 % of land in Indonesia has been allocated for extractive mining. In 2004, a total of 890 contracts were given to mining companies in Indonesia for activities such as large scale mining of minerals, gold, coal and others found in primary forest regions.
The government’s attitude toward natural resource management produced policies that did not support management systems based on traditional wisdom. In addition to this, the presence of large-scale industries in the management of these natural resources affected the cohesiveness of indigenous communities, including social, economic, and legal practices as well as traditional institutions.
The shift in control over natural resources as a result of the presence of large-scale industry has changed the nature of management systems from communitybased to individual-based. Not only have indigenous peoples lost their land rights and the right to manage their territories, but the social systems that managed the functions and roles of indigenous women in natural resource management have also been affected. Women had specific roles and functions within their communities, such as the management of medicine crops and non-timber forest products. The opening of forests resulted in women losing medicinal sources, which forced a change from traditional medical treatments to more modern medical treatments. This resulted in a change in the political positions of indigenous women in their communities.
The capitalist and patriarchal work systems of industry have disrupted the social structures that traditionally defined women’s and men’s roles. This has caused discrimination against indigenous women. For example, for those women who have little choice other than to work in such industries, they are paid less than men and have fewer opportunities to obtain strategic and decision-making positions. Women are usually employed as domestic or cleaning attendants. In addition to this discrimination, women also face increased threats of violence due to the military being hired to ‘protect’ the mines or plantations.
Poverty
Indigenous peoples who have traditionally relied on nature to provide them with all of their requirements such as food (plants and animals) from the fields and forests, fish from the rivers and seas, and sources of clean water, suffer from poverty when they are denied control and access to land and natural resources. The systematic impoverishment of indigenous peoples has occurred through the transfer of land and natural resource ownership, resulting in the loss of indigenous peoples’ livelihoods. To survive, indigenous women have come to depend on their husband’s income or, in some cases, have had to find paid work to increase the family’s income. In many cases the family’s income is not enough to cover the requirements for everyday life, including education and health.
Health Issues
Pollution of bodies of water and land resulting from disposal tailings and the use of fertilizers and pesticides has caused serious health problems for indigenous women. These poisonous chemicals enter the land, bodies of water and fields as well as plants that are used by indigenous peoples every day. Women’s domestic roles expose them to such chemicals in the land and waters and can cause serious health problems. Women also get sick from the animals they eat because the animals have been infected from the contaminated water and land.
HIV/AIDS is also becoming a serious health issue for indigenous women. For example, in Timika (Papua), the PT Freeport mining company has provided infrastructure such as nightclubs and motels which have encouraged migration (trans-migrant workers, military personnel) as well as the sex industry. Prostitution involving indigenous women has increased and as a result, HIV/AIDS has become an issue in indigenous communities. Infected indigenous women are marginalized by their husbands and communities, creating social problems in addition to health problems. 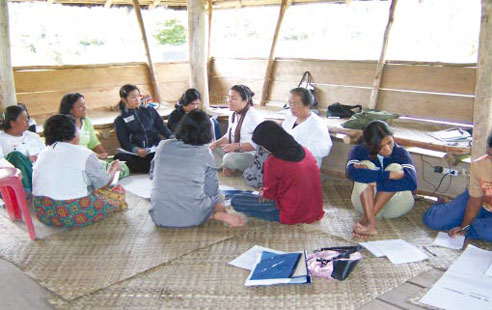 Ttraining for indigenous women held in Central Sulawesi, Indonesia in 2006. During this training, many women shared their own stories and experiences of development aggression.
Sexual Violence
Indigenous women who work in mining and plantation companies responsible for the loss and destruction of indigenous lands and natural resources often experience discrimination, even sexual violence. For example, in PT Kelian Equatorial Mining (KEM) in East Kalimantan, there have been several cases of sexual harassment of indigenous women by PT KEM workers at all levels in the company hierarchy. According to Mining Network, 17 out of 21 legal cases reported between 1987 and 1997 have been for sexual harassment, rape or sexual intercourse under psychological pressure from PT KEM employees on indigenous women working in the company.
Questions for Discussion
To Find Out More
AIWN – AMAN – Rights & Democracy 2007

The Human Right to Food in Haiti: Report of an International Fact-finding Mission page – 2