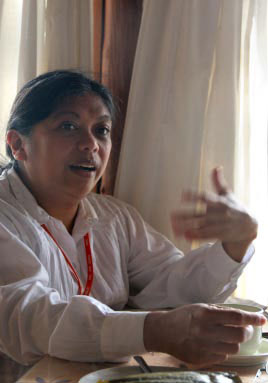 Joji Carino from the Philippines at the International Workshop on FPIC held in Indonesia, April 2007.

A UN report underlines the main effects on the human rights of indigenous peoples of these large-scale projects as being ‘the loss of traditional territories and land, eviction, migration and eventual resettlement, depletion of resources necessary for physical and cultural survival, destruction and pollution of the traditional environment, social and community disorganization, long-term negative health and nutritional impacts as well as, in some cases, harassment and violence” (Report of the Special Rapporteur on the Situation of Human Rights and Fundamental Freedoms of Indigenous People, Rodolfo Stavenhagen E/CN.4/2003/90).
Development aggression often leads to the militarization of indigenous territories. When development projects are imposed on indigenous communities, the State and/or the private firm involved fear resistance from the affected communities and protect their operations with security forces (military, police, or paramilitaries). 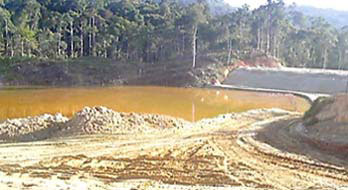 Canadian mining company TVI Pacific in Siocon, Zambonorte, Philippines. Mining operations such as this often have a significant impact on the environment, particularly on water sources which can affect the health of indigenous women.
Further Marginalization of Indigenous Women
Asian indigenous women occupy an extremely disadvantaged position in society. They are victims of oppression at multiple levels: for being women, for being indigenous and for belonging to what is usually the most exploited classes in society. The profound impacts of development aggression on indigenous women and the various roles they play in their communities have contributed to their further marginalization.
Asian indigenous women play a primary role in production in their largely agricultural based communities. They engage in farming or plough cultivation in settled, irrigated or terraced fields, assuming difficult duties such as hoeing, transplanting and weeding. In addition, in order to complement their diet or incomes indigenous women will often engage in other economic activities such as foraging, fishing and handicrafts production (weaving, knitting, basketry, embroidery, etc.). While men go hunting in hunter communities, women will be searching for food and other forest products.
“The women were catching fish in the river in the middle of an oil palm plantation when suddenly a security guard came and shouted to them, “Return all the fish to the river! None of you has the right to catch the fish here. This river does not belong to you anymore but to the company.” Then the women returned their fish to the river and, with a heavy heart, walked home in silence.”
(Stephanus Djuweng, 1999)
With the loss of their territories or the destruction of their environment, indigenous women lose control not only over their means of production, which have been the sources of their livelihoods and survival for generations but they also lose their roles as guardians of indigenous cultural knowledge and knowledge of biological preservation. In Cambodia, they have been displaced by foreign logging companies and commercial agricultural plantations. 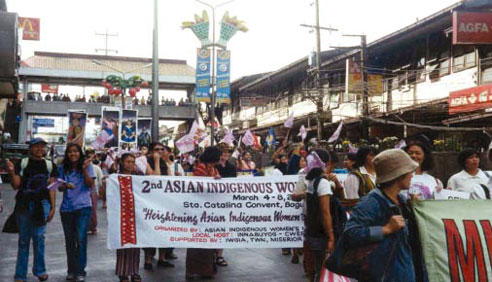 Participants of the Second Asian Indigenous Women’s Conference celebrating International Women’s Day, 8 March, 2004.
“Indigenous Peoples uphold Free Prior and Informed Consent (FPIC) as a fundamental right in the development process, designed to safeguard their material interests, cultures and ecological values and to minimize harm. Meaningful exercise of FPIC requires a preparedness and capacity among various affected and interested parties to engage in processes based on respect and equality, leading to negotiated outcomes. It also means acceptance of Indigenous Peoples to reject developments that do not gain community acceptance based on informed choice…”
Carino, J., I.P’s Right to FPIC: Reflections on Concept & Practice
Questions for Discussion
To Find Out More
AIWN – AMAN – Rights & Democracy 2007

The Fight for Human Rights in Africa: Perspectives on the African Commission on Human and Peoples’ Rights page – 7

The Human Right to Food in Malawi: Report of an International Fact-Finding Mission page – 7