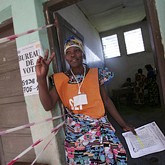 MONTREAL – Sept. 15, 2009 – On the International Day of Democracy, proclaimed by the General Assembly of the United Nations in 2007, Rights & Democracy would like to highlight the struggle for democracy by thousands of human rights defenders around the world. Through their brave actions, these men and women are demanding to participate in the political life of their societies.

“The defenders and promoters of democracy everywhere need our support in their determined efforts to resist the repression of authoritarian governments and to build strong democratic institutions,” said Rémy M. Beauregard, President of Rights & Democracy. “The respect for universal human rights is a precondition for democracy.”

Rights & Democracy reinforces democratic development and the respect for human rights in some of the most difficult countries in the world, including Afghanistan, Burma, Haiti, Colombia, Zimbabwe and the Democratic Republic of the Congo. Next October 7, it will hold a panel discussion in Ottawa on Democratic Development and the Freedom of Expression. Practitioners, policy makers and academics from Canada and the Middle East will analyze the growing role of new media in the strengthening of human rights and democratic practices in non-democratic states. The public event will be webcasted live.

Gender and Human Rights Violations Manuals to be Published