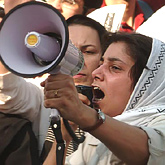 MONTREAL – March 7, 2007 – Rights & Democracy condemns the ongoing detention of at least 26 women involved in a peaceful human rights protest in Tehran over the weekend and calls for their immediate and unconditional release.

Witnesses say National Security Police officers and secret police arrested the women as they protested peacefully outside Tehran’s Revolutionary Court. Witnesses also claim officers used excessive force during the arrests and injured one women when they hit her head against a van and broke one or more of her teeth. Reports say those who remain in detention have now launched a hunger strike in an effort to win the release of some younger colleagues.

Among those detained are many of Iran’s leading women’s rights activists, who had gathered outside the court on Sunday to show solidarity with five women on trial for organizing a protest in June 2006 against Iranian family law and its protection of practices that discriminate against women, including polygamy. The five are being tried on charges of endangering national security, spreading propaganda against the state and participating in an illegal gathering.

According to reports, the women arrested on Sunday were transferred to a restricted unit at Tehran’s notorious Evin prison run by Iran’s Ministry of Intelligence, where they remain. Evin Prison is also where Canadian photojournalist Zara Kazemi was detained and fatally beaten by Iranian security agents for photographing a demonstration outside the institution in 2003.

Sunday’s protest was part of planned events leading up to International Women’s Day this Thursday. Women’s rights activists in Iran believe the arrests were intended to intimidate them from staging further events marking the day.

Rights & Democracy strongly condemns this abuse of fundamental human rights, including the right to assembly and the right to free expression. Rights & Democracy calls on the Iranian government to release those demonstrators who remain in detention immediately, and bring an immediate end to its intimidation of protestors exercising rights that Iran is obliged to protect as a party to the International Covenant on Civil and Political Rights and the International Covenant on Economic, Civil and Cultural Rights.

“As the world turns its attention to International Women’s Day this Thursday, it is imperative that the International community send a strong, clear message to Iran that such blatant disregard for its international human rights obligations will not be tolerated,” said Jean-Louis Roy.

To underscore its support for women’s rights in Iran, Rights & Democracy added its name to a petition started by Iranian women’s groups in August 2006 that is seeking one million signatures in support of their efforts to end legalized discrimination against women in Iran. The petition can be found at

World Food Day: Freedom from hunger is still an illusion for many