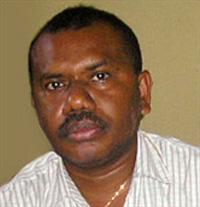 MONTREAL – November 17, 2005 – Yan Christian Warinussy, winner of Rights & Democracy’s 2005 John Humphrey Freedom Award – one of Canada’s highest honours for work in the field of international human rights – will be in Canada 28th to Dec. 8th for a series of public presentations on the courageous struggle for human rights taking place in his native West Papua, Indonesia.

Mr. Warinussy’s Canadian tour takes him to Victoria, B.C., on Monday, Nov 28; Winnipeg, Manitoba, on Wednesday, Nov. 30; Toronto, Ontario, on Thursday, Dec. 1; and Montreal, Quebec, on Monday, Dec. 5. Mr. Warinussy will be presented with the 2005 John Humphrey Freedom Award at a special awards ceremony in Ottawa on Dec. 8. For the full itinerary, please click here.

As Executive Director of the Institute for Research, Analysing and Development of Legal Aid, also known as LP3BH, Mr. Warinussy is committed to the often dangerous task of providing legal representation to West Papuans affected by the Indonesian military’s 42-year-old campaign to assert control over the region, which occupies the western half of the island shared with Papua New Guinea. It is estimated that as many as 100,000 Papuans have died since Indonesia took control of West Papua in 1963, many of them victims of extra-judicial executions, torture and sexual violence.

“Yan Christian Warinnusy’s dedication to human rights in West Papua is a commitment he maintains despite extreme adversity, intimidation and threats to his personal safety,” said Janice Stein, Chair of Rights & Democracy’s Board of Directors. “The tragedy unfolding in West Papua is one that has gone unnoticed for too long, and we hope Canadians will listen to the voice of Mr Warinussy and support his courageous struggle.”

The John Humphrey Freedom Award is given each year by Rights & Democracy. Named in honour of John Peters Humphrey, the Canadian law professor who prepared the first draft of the Universal Declaration of Human Rights, the award includes a $25,000 contribution to the Winner’s work and a speaking tour of Canadian cities.

Rights & Democracy voices concern over the electoral process in Haiti